The natural disaster we experienced along our rivers in south central Montana this past summer needs no recap. It was shocking. Right outside our front doors, up and down our local valleys, we witnessed a geological event not seen in our area in living memory. As a community, we learned a lot. We learned about the importance of community disaster preparedness, the worth of reliable and accessible information, the value in having good and helpful neighbors, and re-learned just how powerful Mother Nature can be. Although the initial shock may be behind us, much of the work lies ahead.
Disasters bring with them many phases of response. The initial response was characterized by volunteers, donations, good Samaritans, and our local and state agencies assessing the damage. The medium-term response has been about impacted property owners along with county and state officials determining what options they have available to them and analyzing what work can be done, when it can be done, what permits are needed to do so, and what the price will be. We are certainly not out of the woods yet, but the Stillwater Valley Watershed Council (SVWC), thanks to the extremely generous support of community partners, is now able to focus on the next stages of recovery. We are pleased to introduce our new community post-flood River Assessment and Triage Team (or RATT for short).

Background The flooding of the Stillwater and East and West Rosebud Rivers was on a scale never seen before.  Along with many other community organizations in the county, SVWC was left asking itself what could be done.

In the weeks following the disaster, the Musselshell Watershed Coalition (MWC) held an open meeting at the extension office in Roundup. The goal of the meeting was to discuss lessons learned from the hardships they have experienced in their watershed. In 2011, the Musselshell was hit with flooding, which, unlike the flooding experienced this summer in Stillwater County, saw sustained historic high water that lasted for weeks. This dramatically changed the river and watershed and shook homeowners and landowners along its banks to the core. It also spurred a decade of hundred-year events, one after the other, including additional flooding from rain and ice jams in subsequent years. The MWC wanted to share their experiences with neighboring communities going through a similar journey.

Members of the SVWC were in attendance that day and heard two lessons loud and clear: 1) Recovery takes time. Patience is required. On the Musselshell, it has been a process of no less than a decade, as conditions change every year. 2) Established community response structures and networks are needed to streamline assessment and response from day one. Enter: the RATT team.

SVWC immediately got active and called together two meetings of community organizations and foundations to talk about both points. In August and October, representatives from a range of groups in Stillwater County got together and talked about emergency preparedness and how to plan for the future. These conversations are ongoing.

The RATT During these two community meetings, we introduced the idea of forming a RATT team. We asked community organizations, many of which had already started raising funds for flood recovery efforts, if they had the capacity to contribute to funding the team. Again, we learned what a generous community we have.. So far we have received the following contributions from the: Absarokee Civic Club, Columbus Community Foundation, Nye Community Foundation, Stillwater Protective Association, Stillwater Conservation District, as well as the Absarokee Community Foundation (from a grant through Montana Community Foundation’s Montana Disaster Recovery Fund). Additionally, SVWC will be providing the seed money to get the RATT team off the ground and into the water, matching funds for future grant applications will be used to finance the team, coordination of the team and future match funds for landowner remediation projects. With the community support we have received so far, we are off to a fantastic start.

The team will be modeled after the concept that was used as a response to the disaster along the Musselshell. The team includes a geomorphologist (Karin Boyd), hydrologist (Tom Osborne), fisheries biologist, local Conservation District, and representatives from the SVWC. The team will assess local rivers (Stillwater, East Rosebud, West Rosebud, and Rosebud) as a whole, focusing on priority reaches and landowners, landscape and natural resources most impacted by the June flooding. Although the team will draw conclusions and publish best practices and recommendations based on specific site visits that could benefit landowners, the team is mostly responsible for getting a big-picture look at the situation to work toward a coordinated response.

An initial meeting of stakeholders was held in early November at the Conservation District in Columbus, where we determined who will initially serve on the team and what actions must be taken next. One of the first such steps is to obtain pre-disaster aerial photography of the entire stretch of the effected river as well as quality post-disaster footage for comparison.

Specifically, the RATT team has been tasked with the following objectives:
1) Evaluate the impacts of the June 2022 flooding on the Stillwater, Rosebud, West Rosebud, and East Rosebud rivers to document character of the event and its ramifications.
2) Document impacts, described in terms of primary geomorphic processes at work, and conceptual alternatives providing flooding mitigation strategies that are cost-effective and support the long-term health of the river systems and landowners involved.
3) Present permitting requirements with a summary of potential funding opportunities.
4) Ease the financial burden of landowners, providing technical guidance site summary reports as well as best practice recommendations for river cleanup and stream bank restoration efforts.

Getting Started With the generous support of community organizations and engaged citizens, we are thrilled to be launching the RATT team. The team is preparing to conduct site visits to begin assessments and will be in touch with landowners in the near future regarding this task, working closely with the Conservation District. To help get this process started, we are asking effected landowners to fill out the landowner survey. Surveys are available at various businesses in Fishtail and Absarokee, as well on SVWC's website.

We are thankful to the community partners who have contributed financially to this venture.We are convinced that the work of the team will steer our community in the direction of long-term recovery as well as make the watershed, its residents, and communities more resilient to the next natural disaster.

Updates on the work of the RATT team will be made available to the community. For more information, to receive a survey, or questions about the RATT team, please contact Lindsey Clark or Tommy Flanagan at svwc2010@hotmail.com.
Click to Take Post-Flood Landowner Survey
Photos Courtesy of Larry Mayer, Billings Gazette 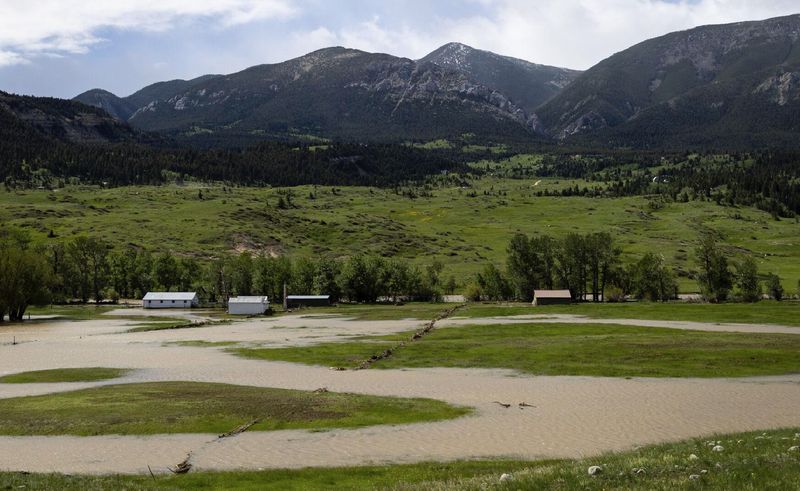 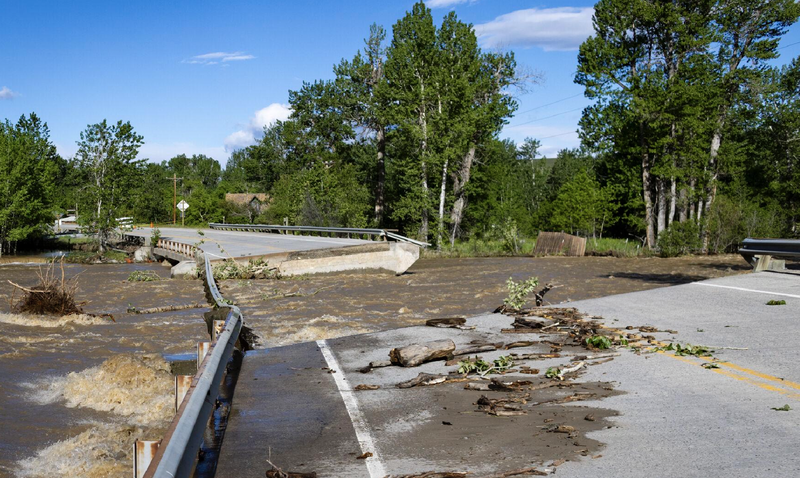 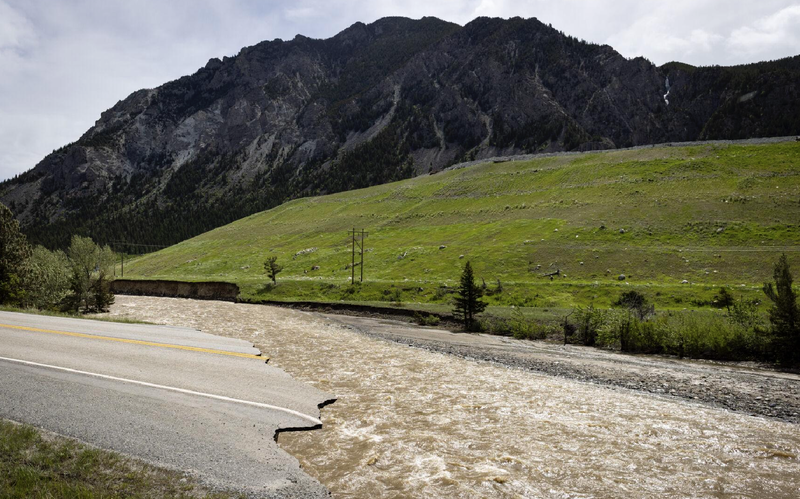 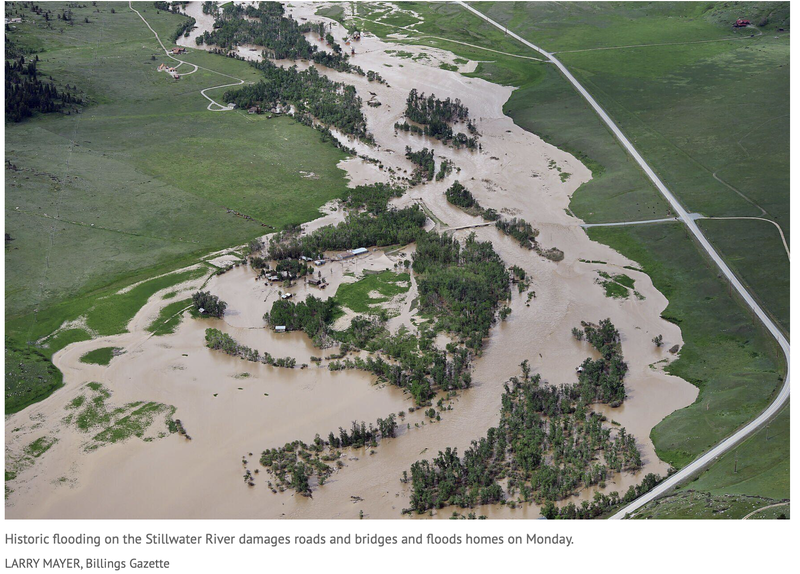 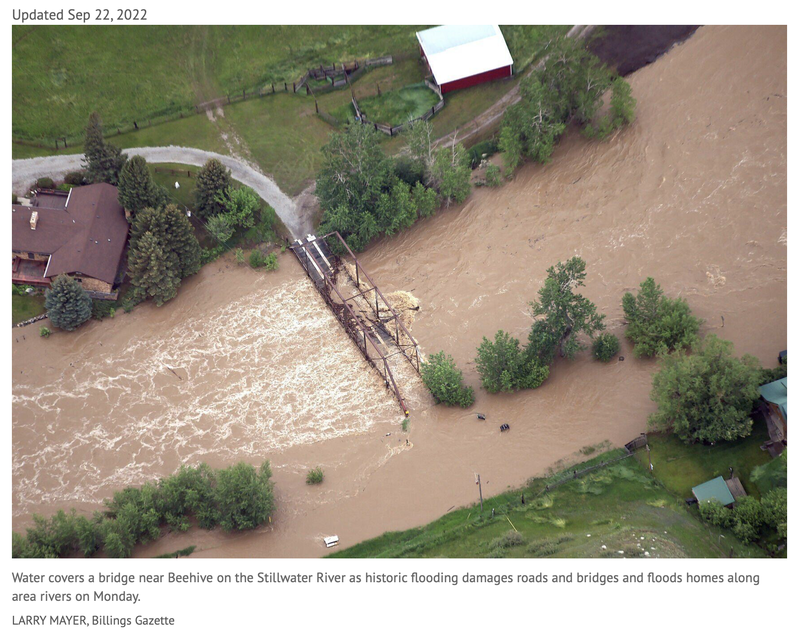 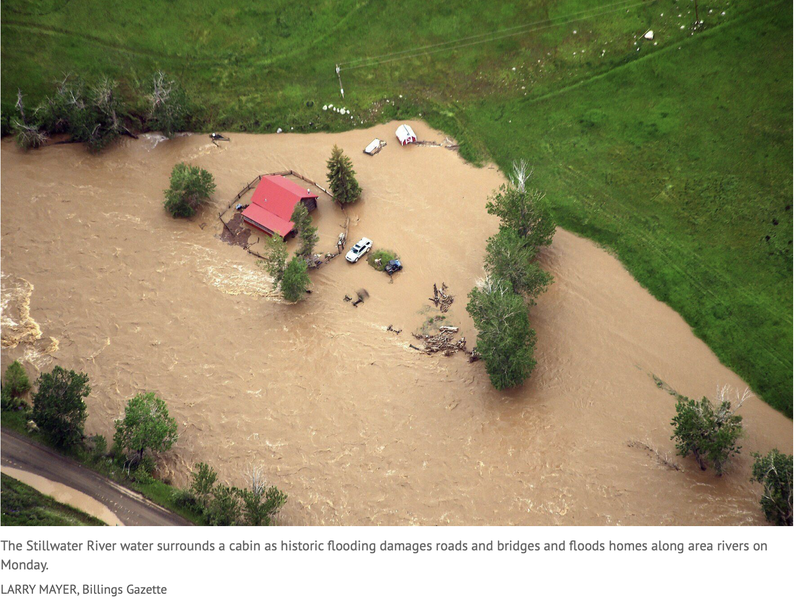 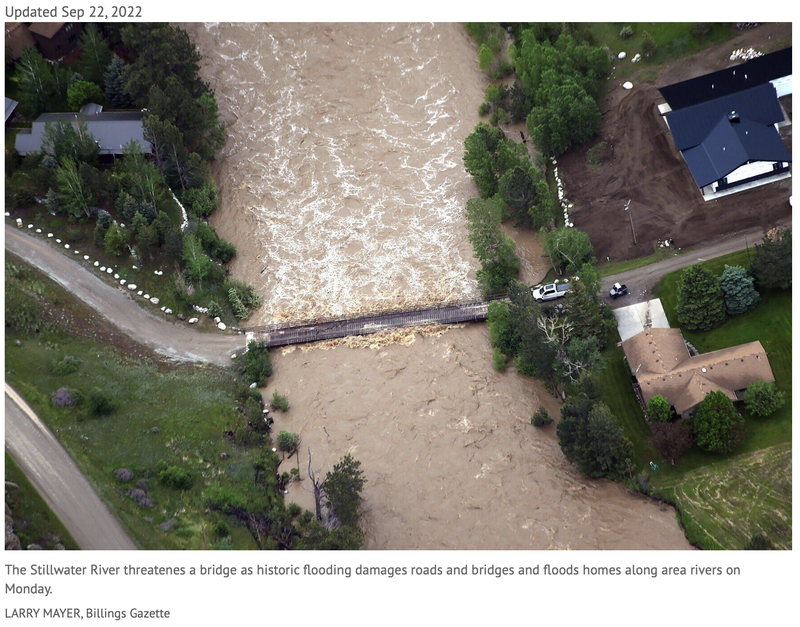 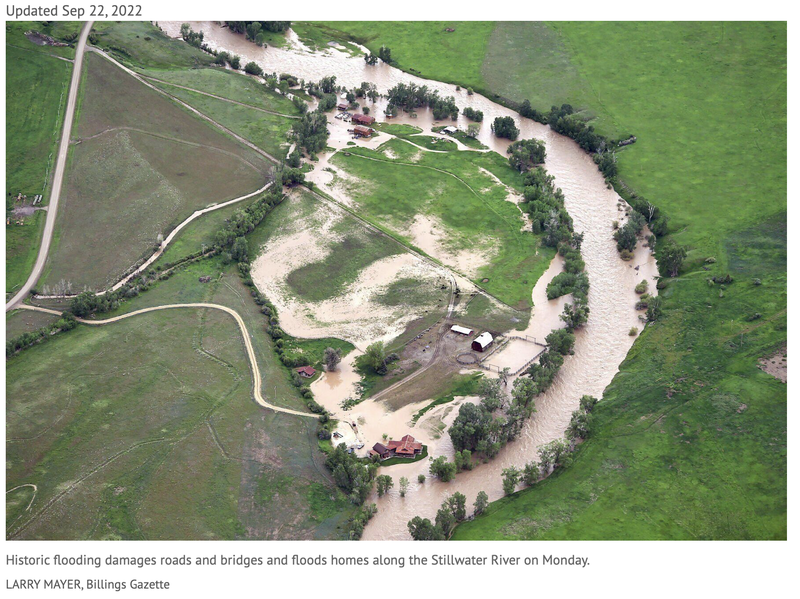 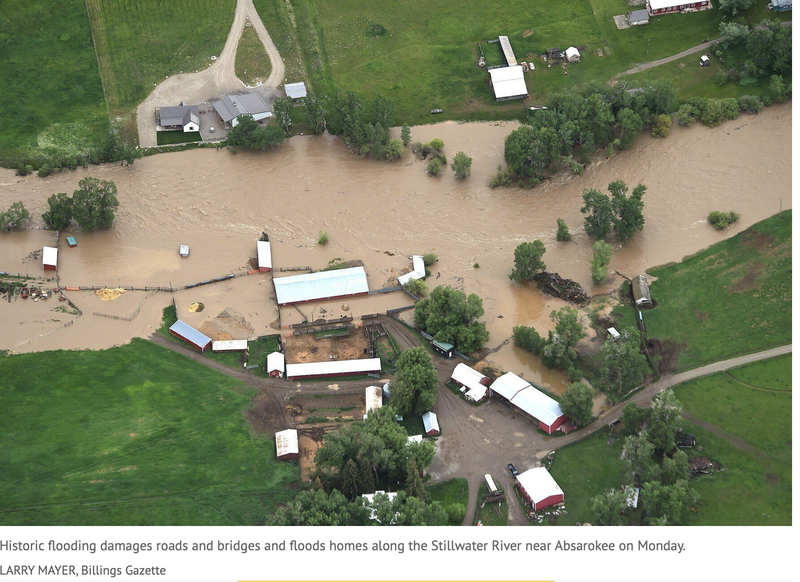 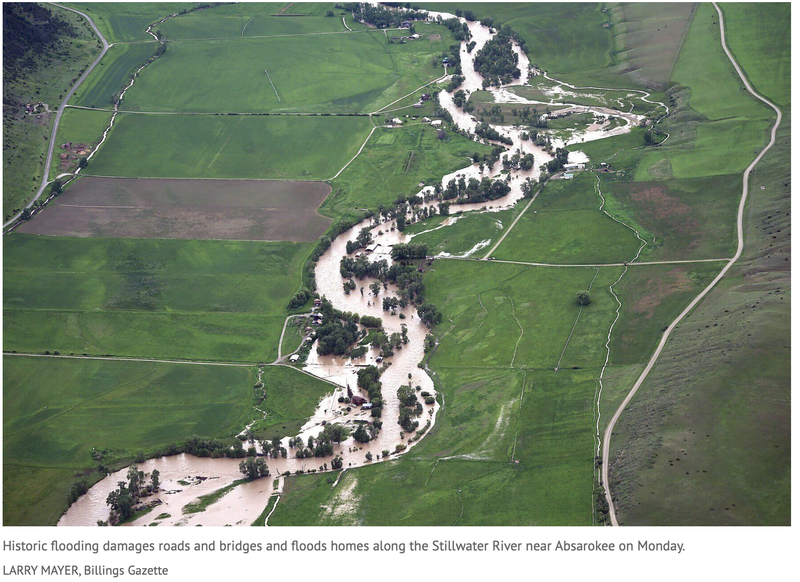 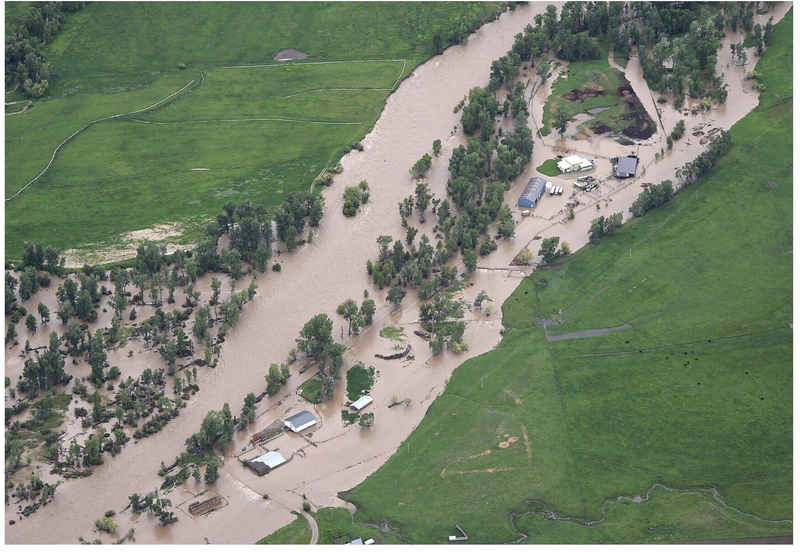