​The Stillwater River nourishes residents and visitors, and now that water, essential to so many lives, is being regularly sampled to monitor its health. “It is about raising awareness and making folks in this watershed realize that it will be up to residents to take ownership,” said retired hydrologist and Absarokee resident Tom Osborne. Osborne pitched his services to the SVWC to lead the project, which also includes monitoring two main tributaries to the river, Rosebud and Butcher creeks.
“It fits neatly with their goals,” Osborne said, and “Monitoring ambient water quality is like doing a checkup of yourself,” which after two years of data will provide a baseline. Such programs improve “the local ability to understand where and what activities could help restore or protect water quality in their area,” said Darrin Kron, Water Quality Monitoring and Assessment Section supervisor for the Montana Department of Environmental Quality.

Locally
Osborne’s partners have a deep interest in water. The SVWC was formed in 2010, expanding a weed management organization in the upper watershed valley. Building on the success of that work, the council added water quality, forest health, soil enhancement and education efforts to its agenda.
Lindsey Clark, coordinator of the council, said some landowners were suspicious of Osborne’s intentions at first. “Water can be war,” she explained, especially in years of low flows like this one. Clark is one of the volunteers helping Osborne collect water samples. She has enjoyed seeing the streamflow changes from month to month and learning more about what the sampling will reveal.

Grants
The MT DNRC and DEQ are helping fund the monitoring, providing lab assistants and paying for testing costs, thus far. Those tests can be pricey, running about $9,000 a year for samples taken from nine stations each month. “This initiative really helps many water quality programs in the state do more with the funding we have collectively,” Kron said. The Stillwater water quality program is not unique. Through partial funding from DEQ, eight other groups monitor water quality on streams across the state. On the Stillwater River, Stillwater Mining Co. also conducts monitoring for point source pollution.

Anglers
The Billings Chapter of Trout Unlimited (TU), dubbed the Magic City Fly Fishers, and their state organization, Montana Trout Unlimited, also stepped up to help with funding the program and providing volunteers to help conduct sampling. Lyle Courtnage, president of the Magic City Fly Fishers, has fished the Stillwater for at least 20 years. His group sees the water monitoring project as a way to not only give back to the resource, but also to build relationships with landowners and other river stakeholders. Courtnage said there tends to be a lack of knowledge about trout streams west of the Continental Divide, the monitoring may help fill that void. “As people really understand what’s going on, it will be easier to mobilize support down the road,” Courtnage added. “From a TU perspective, we want people to think about watersheds, and what’s the overall health of a watershed.”

​Personal
The water quality monitoring is a way for Osborne to give back to a resource in which he’s long been interested in, invested in and immersed. “For me it’s a legacy thing,” he said. “I’d love to leave the watershed better off.” That’s especially important to Osborne because his grandchildren now recreate on the river, propelling their stand-up paddle boards down the stream. 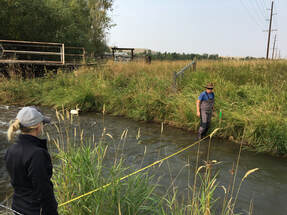 APRIL 2021 - Watershed “Special Project” Flashback — 1991. George H.W. Bush was president, the Soviet Union began to dissolve, a gallon of gasoline cost $1.14, Down Home by Alabama was the top country song, and the Butcher Creek watershed project kicked off in Stillwater and Carbon Counties. This ambitious watershed assessment and restoration project was led by the SCD when Barbara Berry was the Administrator. At least $412,000 of agency funds came in from the Soil Conservation Service Great Plains program, the State of Montana DNRC, Department of Health and Environmental Sciences, and Montana FWP.

The project focused on Butcher Creek, a tributary of Rosebud Creek that arises at the foot of the Beartooths and discharges to East Rosebud Creek just south of Absarokee. Accounts from the time state that Butcher Creek has substantial sediment load that impacts the cold-water fisheries of Butcher Creek, the Rosebud and Stillwater River. The project included water quality monitoring and landowner-identified streambank and riparian restoration projects.

The natural flow of Butcher Creek has been altered since 1894 by the transfer of water for irrigation from East Rosebud Creek. The increase of flow in a channel mostly formed in soft erodible soils has led to chronic streambank erosion. Management of irrigation water and return flows are a challenge on the relatively steep slopes of the basin.

The Butcher Creek project ran for at least eight years, resulting in erosion control projects like willow planting, off-stream livestock watering and irrigation water controls. An extensive set of water quality data were collected that attempted to see whether the restoration projects led to measurable reductions in sediment and nutrients in the basin. A large file drawer of information on this project was recently “found” and is being evaluated to re-learn the lessons contained on the many typewriter-written pages. It is pretty clear that the project was an example of positive watershed cooperation among the many landowners, scientists and citizens involved.

Flash forward to 2020 when SVWC’s watershed monitoring and GIS project kicks off. Last fall, the SVWC formally released its latest project aimed at continuing a watershed assessment project, monitoring the health of streams and developing geographic information system (GIS) mapping capability in the watershed. An impressive array of partners have come together for this project including the Stillwater Conservation District (SCD), Natural Resource Conservation Service (NRCS) Columbus office, FWP, the U-cross Foundation-Yale School of the Environment, Trout Unlimited and Tom Osborne, a local retired hydrologist. The project is called the Stillwater-Rosebud Water Quality Initiative (SRWQI).

The SRWQI involves monitoring basic water quality parameters at sites in the Stillwater-Rosebud drainages roughly monthly over a two-year period beginning October 1, 2020. Other than at certain facilities like Sibanye Stillwater Mine and community wastewater plants, there has not been routine water quality monitoring in the watershed since the United States Geological Service dropped their monitoring program eight years ago. “Our streams are such a valuable asset to our lives we can’t afford to neglect their health either”, said to Tom Osborne who has volunteered to take the lead on this project with support from the SVWC board and local volunteers.

The companion GIS effort involves mapping key natural resource features in the watershed from the large bank of data sources available from state, federal and local agencies. The SVWC has at its disposal a graduate research assistant located at Yale University who, working remotely under local supervision, will pull various data layers together into a system usable by the SVWC and other local entities.

The project’s moving parts came together this past summer after the SVWC was approached by Tom Osborne of Absarokee, who volunteered to help lead the work on the ground. Tom is a retired professional hydrologist who has worked on water resource projects around Montana for the past 45 years. The project is looking for local students and adults interested in getting involved.